So I decided to start using Tinder the other week with no incentive whatsoever rather than to talk to new girls (and troll every now & then). I have no shame in using it because it offers a low-cost punishment: either they didn’t like you, or they liked you but you failed to choose the right words. After almost a month into swiping and conversing, something about the app dawned on me.

Applications like Tinder & Bumble provide a platform for people to decide whether or not they like somebody before they get to know them. Now your typical human probably wouldn’t agree with that statement, rather believing that once you start getting to know someone you then decide if you like them. This is not true. All Tinder is doing is providing the same platform that we have in real-life dating, and therefore we tend to approach it with the same level of doubt.

The reality is, we actually DO decide before-hand, but then we stop trusting ourselves because of one big factor: personality. This applies to both parties believe it or not. One person decides if they like the other’s personality, while that same person questions if their own personality is compatible. For example, a girl may decide they don’t like the boy after she found out he eats a lot of meat, while the girl is vegan. That isn’t something that is found out at face value. In this case, the statement ‘don’t judge a book by it’s cover’ is ingrained in all of us.

And then there’s this other thing called identity that tends to hold us back from the direction our gut tells us to move. For example, once a guy figures out the girl he’s been seeing is abstinent, he decides he wants to stop seeing her. Again, both parties are involved here. The girl for her religious preference, identifies with that, while the boy identifies with sex and prioritizes that over the girl he’s with. That or he could be embarrassed around his boys when they find out that his girl is ‘waiting’. 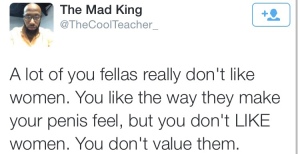 Both identity and personality tend to put walls up for all of us when it comes to relationships. The real indicator of a relationship though is how vulnerable and accepting you are. Ideally, we want to be our best, most honest self and want the other person be that too, but not through the screen of who we think we are.

This is why a ton of relationships fail, because of expectations and values we think have to be there. A girl hates smoking and smokers, so she scolds her man for smoking and makes him an ultimatum (smoking vs. her). Or say someone is marrying a Jew and demands they not have a Jewish wedding, while his family expects tradition in their family. There is too much conflict of interest for people to be together these days.

But what if we could let go of our ego in a relationship? What if we could let go of our own needs and think of the other person? Read that again. I did not say put the other person’s needs over your own, but put the person over either of your needs. I would say that determines true success of a relationship. What does that have to do with Tinder though? Maybe I should stop expecting anything out of it (not even a booty call because apparently most girls on there aren’t into hook-ups).

The importance of dropping everything you thought you were and everything you thought you wanted is vital in relationships. I believe you only know exactly what you want only when it’s right in front of you. This brings me to the story of how my parents ended up together. I’ll skip everything that happened leading up to it because there is one part in particular that caught my attention, which was not just when, but how my dad proposed.

So one weekend while my parents were living in DC, my mom was getting impatient because she had given my dad a “deadline” of sorts and grew irritated at him for not proposing yet (it was rapidly approaching that important 2 year date at the time). My dad wasn’t answering his phone and they hadn’t seen each other all day, so my mom was pretty heated at this point. So then somehow she ends up at my dad’s apartment one night and he surprises her with a nice bath, and a candle light homemade dinner with champagne.

Eventually, my parents settle down and are sitting there watching TV, while my mom is a little less angry, and all of a sudden my dad says out of nowhere, “Oh just in case I forget later, will you marry me?”

My mom loses her mind, starts jumping around the apartment and calling family members telling them the news. Obviously she said yes, but think about the one little detail that was left out at first: the ring. My dad made it a point to ask my mother to marry him before he presented her any jewelry, just so he knew she was in it for him and not the glamour of it all. He eventually pulled out a ring to make it ‘official’ but it was important to him that my mom wanted to marry him, and not just get engaged.

That really speaks volumes to me about their relationship, their values in relationships, and the way I perceive relationships today. As cliche as it sounds, relationships only work out if both parties can let their guard down.

That’s why I think homosexual couples have a more solid foundation in their relationships, because they are being their most honest selves. They don’t need to pretend for each other or play a role because they both know who they are. You can’t save the other person in a relationship, savior self first. And no, Tinder can’t save you.

And also happy 26th anniversary to my parents.