I went to the movie theater the other day with some friends and finally saw the most anticipated movie of the summer, Straight Outta Compton. Though I wasn’t even alive during the peak of their success, I did have some knowledge of a few of the members in the group (Dr. Dre, Eazy-E, and Ice Cube).

I am much more familiar with Dre and Cube and a lot of the work that they’ve done post-NWA. This movie really encapsulated the true events of the NWA members and the ups and downs of their success, most of which I had no idea about. This was truly a history lesson for me and I thoroughly enjoyed the movie as the piece of art that it is. I also believe this film is extremely important for the times that we’re living in today.

Now I could talk about all the sex, drugs, and violence being portrayed in this movie, but this was a biopic, meaning everything depicted in this movie was real. Some of it may have been a bit exaggerated, but we wouldn’t know either way. One thing I did enjoy about the movie was how real some of the key moments were like when Dre’s little brother died and Eazy-E was diagnosed with HIV. These parts of the movie had quite the emotional twist that every great movie has, and it was much more impactful because these events actually took place.

One thing they really highlighted on (and I believe it was done purposefully) was the police brutality. From the beginning to the end of the movie the police were definitely the villains in this story.  It’s important that this movie came out around this time because of all that’s happening in America involving police brutality. Various times in the film the NWA members were walked up to, disrespected, and cuffed right on the spot just for standing in their place. There was even one part where the officer called Ice Cube a n**ger. You could say that they focused more on this issue because of what’s going on today, but this isn’t a new problem obviously. Police brutality and racial profiling has been a problem for several years and the spreading of this awareness is very important today. The part where they performed in Detriot and the local police warned them not to play their song “F**k Tha Police” but did anyway, was a stand out scene for me. It really highlighted how unpopular the system is in our culture and still is and that song was a groundbreaking moment in hip-hop.

The actors in this movie did a phenomenal job, having Ice Cube’s son play him was a great idea, the guy who played Dr. Dre was so good that Dre himself was freaked out when he met the actor for the first time.

Even Snoop Dogg and Tupac’s appearances seemed like the real thing. I don’t usually dig that deep into an actor’s performance in a certain film, but I can certainly tell when an actor is doing well or not based on how engaged I was in the movie, and I didn’t take my eye off for a second.

There was even a sense of humor in the movie which every great movie usually has. The scene in particular when NWA was on their first tour in the hotel room was probably my favorite scene. Some guy came knocking on their door with a gun in hand (not knowing there were several more guns in the room) looking for his girl. After panning the entire room full of sex alcohol and drugs, they found the girl he was looking for (hilariously named Felicia) and Eazy-E met the dude outside with a large shot gun yelling “shes got a real n**ga dick in her mouth right now”. 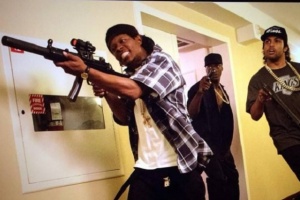 This scene was probably the stand-out humorously, and not to mention Ice Cube was there to kick that same girl out saying his famous line “bye Felicia”.

Another thing they highlighted in SOC was the ills of the music industry and how artists can be taken advantage of. It’s safe to say that NWA’s manager Jerry was not anyone’s biggest fan by the end of that movie. He took full advantage of the artist’s talents and kept most of the money to himself. Ice Cube was the first to realize this and left the group after one year of being on tour. He made a smart choice to go solo because that’s when his career really took off. I also did not know that he wrote all the

I also did not know that he wrote all the Friday films as well as Boyz in da Hood. Dr. Dre also eventually went solo but he was a little late to the party because he was more so focused on the music than the money. Suge Knight in a way saved his career bringing his contract guidelines to his attention and helping him launch Death Row Records, as well as discovering Snoop Dogg and Tupac. Luckily he became aware of this because who knows if he would have as many funds as he has today had he never went solo. But then leaving Suge & Death Row and curating Aftermath was an even better decision, eventually finding artists like Eminem, 50 Cent, and Kendrick Lamar.

Throughout the movie. I thought to myself, what if Eazy-E was aware that he was being taken advantage of earlier? What if NWA went independent and had even bigger success?  I also thought about when Eazy reached out to Cube and Dre for an NWA reunion right around the time he got diagnosed with HIV. So many things would have been different had some things unfolded another way. Nonetheless, the story of NWA shaped so much of how hip-hop is perceived and portrayed today. And seeing Dr. Dre’s impact on music in general after seeing how his life was before any money at all (he was homeless!) was truly inspiring. Not to mention releasing an album with all original music the same week as the movie premiered is pure genius.

One main theme I picked up in this film was how black culture is extremely glorified in America, but black people aren’t quite as popular. This just goes to show that the saying “if only America loved black people like they loved black culture” is  a very real perspective and has been for years. The fact that Straight Outta Compton did record breaking numbers in ticket sales right around the same time the #blacklivesmatter movement is in full swing just proves that not much has changed in America since the late 80s-early 90s.

Final verdict: 4.5 outta 5 stars. I recommend this movie to anyone who is a hip-hop-head and anyone who’s interested in learning about NWA’s come-up.